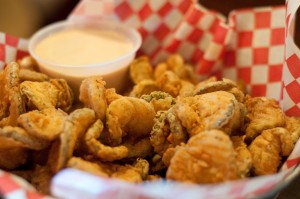 them) But it’s also another way to extend your own culinary achievements –  your whip cream dispenser isn’t just for whipped cream anymore! Use your ISI whipper to make batter for fried chicken, onion rings, the list goes on!

(Note: A kitchen tool frequently used at Flip, an iSi is a professional cream whipper that uses an N2O canister of nitrous oxide. Its use is consistent with Flip’s goal of incorporating a science aspect into the restaurant’s culinary endeavors)

Beginning with dry items, combine all ingredients in a mixing bowl.
After adding in liquid components, mix all ingredients together.
Pour into an iSI canister; screw top tightly.
Insert charge; let stand 10 minutes.