I just finished the best drink I’ve had in months.  So good, I have to share!  Made it myself, and you can too.  But it started with another experiment (so learn from my mistake). 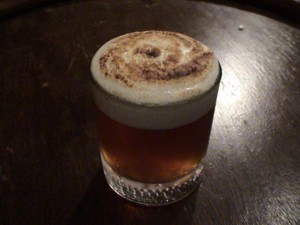 I have heard about this “Bacon infused vodka” thing for a while, but never tried it till yesterday night.  I fried two pieces of extra thick cut bacon, cut them in half, and added them to my Mosa 1 pint cream whipper, purchased from Creamright.  I added just under a pint of Sobieski vodka, and charged with 2 N2O chargers (shaking between charges for maximum dissolving).  I waited 10 minutes, blew all the gas, opened the cream whipper and waited another 10 minutes, swirling periodically.  I then tasted the vodka, and though it had some bacon flavor (and was cloudy), it didn’t have quite the intensity I was looking for.  I went to the web for help.

Long story short, bacon infused spirits get the main part of the flavor from the bacon FAT, not just the bacon.  So, I screwed up by not pouring in the bacon fat 🙁 but I was still determined.  I added the fat, stirred periodically, and let it all sit overnight.  The next morning I stirred some more, and then (per some insightful bartender’s suggestion) put the whole mixture in the FREEZER.  Two hours later, I retrieved the mix, and removed the fat (frozen and risen to the top), and filtered the mix through a coffee filter.  Much clearer now, yet tinted brown.  Taste?  Very Bacon-y. Yum.

Next time I’ll pour both the bacon & the fat into the Mosa.  I think this will produce the result I want the first time.

I was somewhat starved, yet unwilling to compromise on flavor, so my creative juices flowed.  The result?

Mix all ingredients together until sugar has completely dissolved, add to cream whipper and charge with one N2O Charger, shake vigorously.

Place a cylindrical rocks glass in the freezer.  In a martini shaker, add all ingredients, and add ample ice, and shake vigorously.  Remove rocks glass from freezer and strain mixture into glass.  Top with Espuma from cream whipper (shake vigorously first), dispense in spiral pattern.  Take a butane torch (or windproof lighter) and flame Espuma in a circular motion (medium pace) until slightly browned.  Sprinkle with ground nutmeg.

Upon tasting, prepare to be pleasantly overwhelmed with flavor.  First you smell the aroma of nutmeg with a hint of toasted marshmallow, then the bacon flavor mingles especially well with the Applejack. You then notice the hint of vanila from the Tuaca and experience a “just sweet enough” sensation.  This is a flexible drink, as one can choose to savor the bacon-y apple flavor of the drink or quaff the maple toasted marshmallow creamy espuma.  And best of all is to do both simultaneously.

This is one very satisfying drink to write home about.  Despite the high proof nature of the spirits, you really don’t hardly taste the alcohol.  The flavors balance well.  I’d describe the effects of the Bacon Applejack Old Fashioned to be “pleasantly animating.”  I think most people will really like this drink, and it would be great after a fall meal.

The cream whipper proves itself once again as a cutting-edge creative tool for today’s progressive bartender, professional or amateur.  I hope you enjoy my new twist on an Old Fashioned.